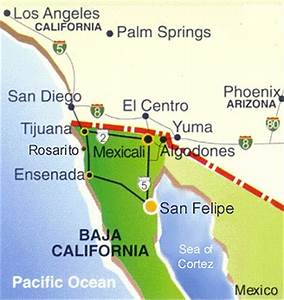 Only 120 miles from US border. Far removed from the highly commercialized and over developed areas of other Baja destinations, El Dorado Ranch provides a unique opportunity not found elsewhere. With everything from beautiful white sandy beaches to a 10,000 foot mountain range it’s no wonder our owners and guests refer to El Dorado Ranch as Baja’s best kept secret. El Dorado Ranch offers prime real estate including sea and mountain-view properties and golf course properties and golf and beachfront condominiums located in our sister community, La Ventana del Mar. Construction costs are equally impressive with quality homes being constructed for as little as $90 a square foot. No other development in Baja can offer these affordable prices with the amenity package, security, abundance of open space and close proximity to the U.S. only 120 miles over the border.

El Dorado Ranch has been in operation since 1989. Since its inception it has become the largest employer in the San Felipe area. With over 60 different home communities, El Dorado Ranch has over 7,000 property owners and over 2,000 homes and structures built.

Development at El Dorado Ranch and our sister project, La Ventana del Mar, has been done in the utmost environmentally friendly manner and has resulted in an ecologically sustainable resort and community.

When the golf course, Las Caras de Mexico was constructed, rather than depleting existing water supplies, we have been able to acquire the rights to a species of salt tolerant grass to make use of high salinity well water sources thereby preserving precious water supplies. Plants that absolutely had to be removed for construction were not run over by a bull dozer, but instead dug out by hand and transferred to a nursery and relocated on the property.

While we are an environmentally friendly development, management has extensive business experience to bring greater financial security to our owners. Ranch Developer, Pat Butler, is an American citizen and spends most his time at the Ranch and is very actively involved in our projects and the San Felipe community.

Mr. Butler is a former International Vice President for Marriott Corporation and the former President and CEO of Coast to Coast Resorts and Golf Card International. His hand-picked international management team is comprised of highly educated and experienced people with a track record of over 35 years in promoting and operating hospitality projects in both the U.S. and Mexico.

El Dorado Ranch has been a major contributor to the growth of San Felipe by bringing in 10,000 visitors per year at its peak to the San Felipe area. Our management team works very closely with Mexican Government agencies and has made U.S. – Mexico investment history by being the first U.S. developer to make largest ever land acquisition from the Ejido. Ejidos are groups of indigenous Mexican people that were able to legally settle sizable land plats across Mexico under the Agrarian Land Reform of 1940. This unprecedented acquisition involved numerous federal, local, environmental, and regulatory agencies and required years of negotiations on the part of the company. Our development plans, financial status, and backgrounds were scrutinized by these agencies before this historic approval was assigned.

Additionally, we have acquired the necessary zoning designations from the local agencies to ensure that covenants, controls, and rules are legally enforceable. This is beneficial for our owners knowing that their community will uphold the standards as set forth in the covenants and help protect property value and enhance lifestyle.

But perhaps the most desirable element of our projects is the natural beauty in which they exist. With most lots having both sea and mountain views the scenery is simply breathtaking. The unique geography featuring a neighboring 10,400 foot mountain range, a pristine and lush desert, and the tranquil Sea of Cortez provides endless recreational opportunity and a lifestyle far removed from the pace of any city. The major element we uniquely offer and deliver is affordable retirement and second homes in a beach town on the pristine Sea of Cortez.

Pat Butler was awarded the Mexicali Business Executive of the Year 2006 Award. This was a special honor because it’s only the third time in the 61-year history of the organization that the award has been presented to a foreigner. “This award was made possible because of a lot of people that have been a major part of the development of El Dorado Ranch – Pat’s wife Doreen; all of his managers and staff in San Felipe and Mexicali; the state and city government offices who we heavily depend on for permits; our suppliers; our marketing and construction partners; and of course all of you, our loyal owners and members.”

The history of the San Felipe region dates to more than 150 million years before present (to the formation of the Baja California peninsula) while its written history goes no farther back than the days of the first Europeans to set foot on its soil. Beyond that, nothing is known of the first humans to enjoy the local shores although information begins to appear from about two thousand years ago.

Dispatched by Hernon Cortés to map the coastline of the then known “Southern Sea,” Fransisco de Ulloa recorded his presence in this area in September, 1539. With him was cartographer Domingo del Castillo who identified the San Felipe cove (on a map he was then making) as “Santa Catarina.” What’s more, because the existence of the Baja California peninsula was unknown at the time (the Spaniards thought La Paz was on an island some of them called “California”), it was Ulloa who reported it at the conclusion of this voyage. That voyage, by the way, included circumnavigation of the peninsula as far north as the approximate location of Ensenada.

One year later, Hernando de Alarcón sailed into the area on an unsuccessful mission of support for the Coronado Expedition.  With Alarcón was the same Domingo del Castillo who, by virtue of the Viceroy of New Spain’s orders to sail as close as possible to the shore, to enable sighting Coronado’s representatives, was able to improve upon the map he produced during the Ulloa voyage.

Sailing in the first ship built on Baja California soil, Juan de Ugarte landed in the bay on July 5, 1721. Twenty-five years later, Padre Fernando Consag landed here and formally christened the place San Felipe de Jesús. San Felipe’s modern history dates from 1876 when the Mexican government signed a colonization contract with one Guillermo Andrade who acquired some 30,000 hectares but died before his plans were realized.

Although the first fish camp was formed in 1904, it was not until 1925 that the first subdelegation was created and San Felipe began to develop as an organized community.

The first fishing society was founded in 1928, the first school established in 1929, and the first tourist facilities in the early 1950’s. Electricity was provided in 1963 and the first potable water in 1967. Jacque Cousteau named the Sea of Cortez as the “World’s Aquarium” with over 875 fish species and 32 types of marine mammals who breed there.

San Felipe is unquestionably the premier destination on the west coast of the Sea of Cortez in Baja. It is 120 miles south of the border. Though sleepy, in comparison to its west coast counterparts, San Felipe has been a secret destination to those in the know.

The Beaches Of El Dorado Ranch Await You

Check out our Travel Package